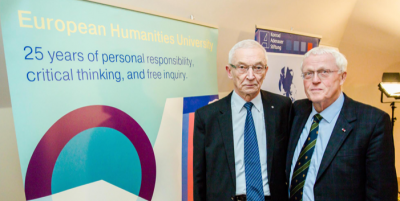 Against all Odds – 25 years of the European Humanities University


It was a demonstration of friendship. On November 17th, speakers of Scandinavian and Baltic Parliaments and ministers of the neighbour-states as well as Lithuanian officials came to the gala ceremony to express their solidarity with the European Humanities University. The EHU was founded in 1992 in Minsk, Belarus, as a symbol: Belarus belongs to Europe and shares its values for centuries. In 2002, fifteen years ago, EHU became member of the EUF.

Shut down by the authoritarian regime in 2004, the University relocated to neighbouring Lithuania with the support of the Lithuanian government and the international community (2006). As a very special birthday gift, the Lithuanian state offered the restored Augustine monastery in the centre of Vilnius to EHU.

“Knowing cannot be a substitute for thinking. Thinking is a special type of human activity that emerges only when we liberate ourselves from routine immersion in day-to-day occupations and from taking what is imposed on us for granted. The very source of thinking is freedom. And freedom is the cornerstone of an education at EHU” – Prof. Anatoli Mikhailov, Founder and President of EHU.

Since re-locating to Vilnius, 2124 students were graduated. 95% of students and full-time faculty came from Belarus. While 62% of the alumni work in Belarus, in private businesses, for NGO’s or independent media, and most of the faculty members live in Belarus, the founder of EHU Prof. Mikhailov has to remain in exile.

EHU is financed by the Lithuanian Government, the EU, the Swedish SIDA and donors such as the Konrad-Adenauer-Foundation. EHU remains committed to its Belarusian identity while seeking integration into the international academic community. It will return to Belarus when it can fulfil its educational mission there without violations of its academic freedom.